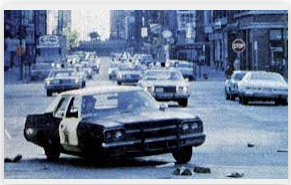 The sight of Jake and Elwood Blues is one of the most defining images of the early 80s. Black suits, white shirts, black ties, a trilby and shades, plus a retired police car give the characters a strange aura, as the two orphans go on a mission from God. The Police car they drive is deeply tatty. In fact, it could do with some services from www.vertexwheels.co.uk, a Mobile Alloy Repair Cheltenham based company. Despite how the car looks, it easily outruns bikers, angry cowboys, even angrier Neo-Nazis and, of course, the Police.

Starting out as a set of repeating characters on the USA comedy show Saturday Night Live, the Blues Brothers were the creation of regular contributors Dan Ackroyd and John Belushi. Belushi was a rising star from the show and had just put in a stellar performance in the film Animal House, also directed by John Landis. However, he was plagued by inner demons and would party pretty hard during production making filming difficult.

Ackroyd’s script was also too long, and Landis had to make several cuts and rewrites. With no final budget, the film executives became extremely twitchy. In the end, the film cost an eye-watering $27 million dollars, unheard of for a comedy film. For example, Star Wars cost $11 million. The film is littered with stars such as Aretha Franklin, James Brown, Ray Charles and Mr T.  They helped to make the film a commercial success and the film now has cult status.